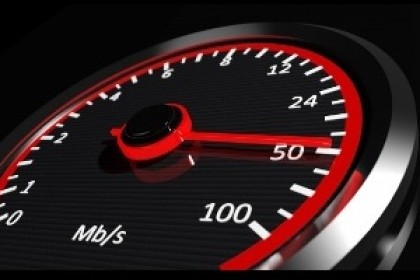 I’ve recently re-designed and implemented a new network for home.  A blog post will follow shortly detailing the design and my reasoning behind it all. This afternoon I’ve been kicking the tyres on the new build and making some tweaks here and there to maximize the performance.

One of the tests I ran was a network speed test between a virtual MS 2012 server and the Synology RS815 NAS.  At the time of writing this blog the hypervisor had a single Gigabit connection to the switch (new fancy Intel dual port server adapter on order).

The 2012 server has an SMB share mounted to the NAS. The Cisco switch is running in layer 3 so the traffic between the server and the NAS is routed via an SVI on the switch. Jumbo frame sizes (9000 Bytes) were enabled on everything in the path including the vmxnet3 adaptor assigned by the hypervisor to the 2012 server. 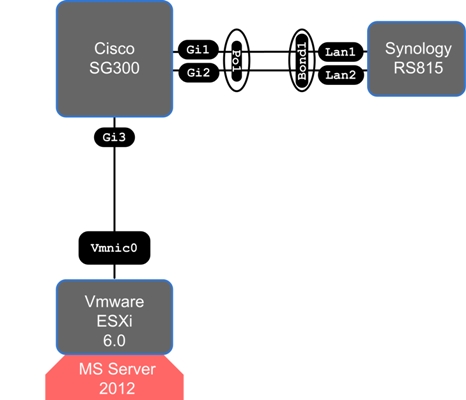 Here is the result from one of the many tests I’ve been running: 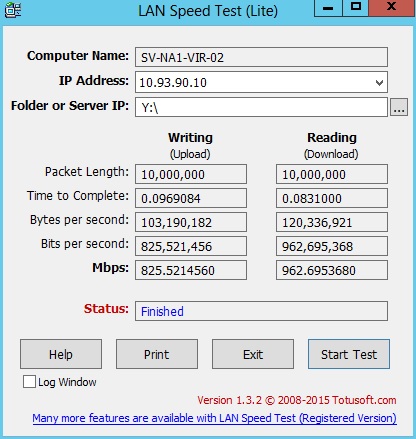 I almost achieved line rate on the read test.  Not to shabby considering the Synology NAS was also running various other services at the time of the testing.

I’m certainly looking forward to installing the fancy network adaptor thats on order.  I’ll build another LACP LAG connection between the hypervisor and the switch.  Not sure I’ll squeeze much more through though as remember the speed of a LAG link is only as fast as physical member ports (1 Gbps in my case).